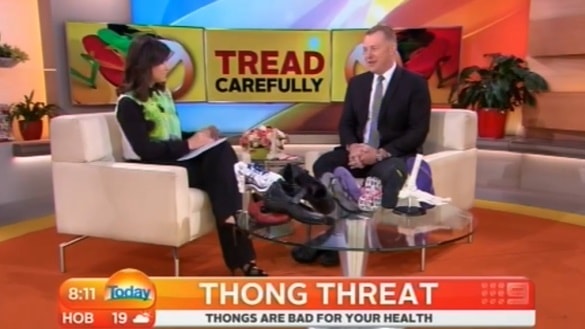 Our podiatrist Brenden Brown was recently on the Today show discussing thongs! If you missed this segment press on the photo above and you can watch the video!

Australian’s have come to love the humble thong, it has almost become an institution in its own right. Characterising Australian life as much as Beer, our love of summer cricket and Barbeques.  Despite our love of the humble thong this easy to wear piece of footwear somewhere in our heads we have come to realise, perhaps even sub consciously, it may not be as good for us as we would LOVE it to be!

Interestingly, despite our love of the thong and its acceptance as almost iconic Australian footwear it does not originate in Australia but from much further a field.

This style of footwear has been worn by the people of many cultures throughout the world, originating as early as the ancient Egyptians in 4,000 B.C. The modern Thong  descends from the Japanese zōri, which became popular after World War II when soldiers returning to the United States brought them back.(*1) Its possibly here and our involvement in this conflict that brought the “thong” to Australia.

So why is it so bad?

Thongs are not the most evil thing in the world …….. That is day time television…. but there is mounting evidence that they maybe creating more harm than good. We see a lot of patients that come in on an almost daily basis in summer who have pain in their feet and legs which can be attributed to excessive wearing of thongs.

So what’s happening? The muscles in your feet are working very hard when you have a pair of thongs on. They do this for two main reasons 1. They are trying to keep the thong on your foot so they cramp up and claw onto the base of the thong. 2. Because in a thong your foot is not very stable. Your foot is moving about quite a bit, you may not that often your thong does not head in a straight direction rather slips from side to side on  our foot. Again here is where your foot is moving about trying to simply stay stable much like it maybe while simply walking in bare feet.

Can it cause me long term damage?

People not only get sore muscles in their feet and legs but there seems to be at the very least anecdotally a mounting body of evidence that wearing a thong may lead to falls trips and other accidents. We also know on many occasions apart from simple things like excessive callous development on the heels of chronic thong devotees there are many people who find themselves with lower back pain, shin pain or heel pain from the malaised thong!

How can I make it better?

OK so I always fear talking, writing or even uttering poorly about the Aussie thong. At the time of writing this article I had just been on the Today show here in Australia giving my expert opinion on thongs. On the Today show Facebook page they placed a post about me appearing on the show saying it may not be good for you. At last count there are 831 people commenting, mostly bemoaning that I would dare criticise the thong. To put this in perspective on the same day Dan Aykroyd Hollywood legend was on the show, his article has attracted 53 ……… Australia I hear you!

Please understand that while I am no fan of the Aussie (Japanese /Egyptian) Thong I am myself someone who wears them. I follow the rules above and as a result I rarely get foot pain. Thongs have a place in our wardrobe but it should be kept for beach wear and light recreation, where not a lot of walking is involved.  There is a whole world of people including some of my academic colleagues who would almost go to any length to protect the humble Thong from attack on its image as iconic Australian footwear. However anecdotally no matter what double blind trial computer topography or emotional tirade you throw at me as a day to day practitioner I see an endless amount of punters with sore and damaged feet which are the direct result of a excessive Thong wearing.  And please let’s not even start me on what a fashion faux pas (Fopar)  they are !

The causes of Smelly feet

Nothing can lower your dignity and respect like having Smelly feet. If you suffer from this condition, you should visit a podiatrist or podiatry clinic for advice and treatment.

The bad odour from smelly feet may sometimes be so intense that people close to you can smell it even when you are in shoes.  Mr Brenden Brown, Principal Podiatrist at A Step Ahead Foot and Ankle Care explains the cause of smelly feet as follows:

Smelly feet are caused by bacteria which feed on the sweat produced by the feet. Your feet have to sweat first; then the bacteria will start feeding on that sweat. The bacteria will then start excreting and getting rid of waste. This waste is inorganic acids. These acids have a pungent, bad and rotten smell.  Your feet will stink like hell (if it smells).

Some people think having Smelly feet is normal; to them, it may be normal but to others it is a nuisance. Improper drying of feet after your bath or after stepping on wet surfaces, and then putting on closed shoes will create a medium for the growth and habitation of the bacteria and this will cause Smelly feet.

For all your Foot and Lower Limb Care needs, come and see us at:
A Step Ahead Foot & Ankle Care
24 Phillip Street, St Marys; or
Suite 4, 36 Woodriff Street, Penrith
www.astepahead.com.au