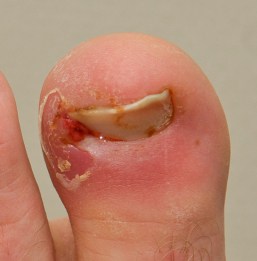 Lisa had pain from an ingrown toenail for several months. She felt she had tried everything including trying to remove the ingrown nail herself. A friend of hers told her just to cut a V into her toenail – which sadly didn’t work. She tried a shopping centre nail salon but they turned her away saying they could not help her.

By this time, the nail had become a little pustulent, Lisa then also visited her GP who was some help and prescribed some antibiotics. While this cleared up the infection that had occurred, it did not take away the pain for more than a day or so and she found that her problem returned shortly after her antibiotics ran out.

When Lisa visited our clinic her toe was red around the area that the nail meets the skin on the side of the toe. It became obvious that what had happened was that Lisa’s toe nail was quite ingrown and that the answer was to remove the offending piece of nail. By this time Lisa was quite upset and was worried about how painful it was going to be to remove the nail.

We offered Lisa the option of having a local anaesthetic injection but we assured her that when you know what you are doing and have seen as many ingrown toenail as the podiatrists at A Step Ahead Foot + Ankle Care, you get very good at removing these with little or any pain.

In this instance Lisa opted to try without the anaesthetic injection. Within a couple of minutes the ingrown nail was removed from the infected area with little if any pain, yes as many people are Lisa was surprised at how painless and easy it was – she’s wondering why she had waited so long?

We asked Lisa to keep a small bandage on the toe for another four days, simply to keep the area dry and free of nasty bugs and bits getting into the area as it was already red and inflamed when she arrived. 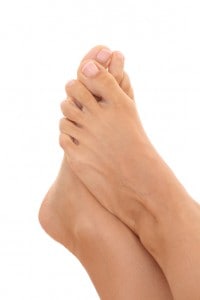 A check up in two weeks found Lisa to be pain free! She reported it took about 24 hours to calm down and has been completely pain free since and she can now go back to wearing her high heels… hmmmmm