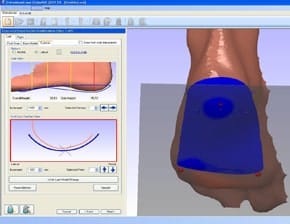 If orthotics alone were the answer to heel pain, most podiatrists would be out of a job! Yes, orthotics can help fix poor foot posture, which can exacerbate heel pain, but there are many causes of heel pain (i.e. you can’t blame foot posture alone!).

That’s a good question, particularly if you’ve been prescribed orthotics. The important point about orthotics is simply that ‘not all orthotics are equal.’

Some orthotics prescribed for heel pain are super hard and rigid, which are not only uncomfortable to wear but might in fact cause you more pain.

For this reason, an ever-growing number of people are ditching hard orthotics in favour of soft, pliable orthotics. This type of orthotic is designed to support the foot, while still allowing for its natural movement (that’s a good thing!).

According to Dr Brenden, “There's no way that just using orthotics is going to fix your heel pain 90% of the time.”

He says there are multiple other factors that need to be addressed to get to the bottom of heel pain such as:

It is an amazing thing, the difference to one’s powers of concentration a pair of comfortable shoes can make.Laurie R. King - Author

Founder of A Step Ahead Foot + Ankle Care in Sydney, and former president of the Australasian Podiatry Council, Dr Brenden Brown (A.K.A Dr Foot) is a wealth of knowledge on how to take care of your feet, including how to find the best shoes.

If you like this video, then check out our other related blog posts and videos: