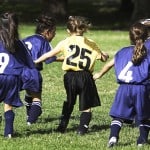 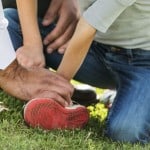 James is a 7 year old boy who is reasonably active loves to ride his bike and play with his little brother and older sister. He comes from an active family that enjoy doing some kind of activity most weekends – a little bike riding some weekend sport or some time at the park. James is otherwise a healthy bright young boy.

James’ mother brought him to see us because he often wakes at night crying complaining of pain in his feet and his legs. James’ mum was quite frustrated and looking for answers, as after seeing at least two other well-meaning health professionals she had not found an answer. On both occasions when seeing other health professionals she was told that this was ‘normal’ and it was ‘just growing pains’. Not knowing what to do and getting the same answer twice, James’ mum was given no choice but to watch James wake at night crying – they tried heat packs and ic

Growing pains in children can be debilitating for them and also stressful to parents.

e on his legs, they also tried rubbing his legs and paracetamol but with little relief. This pain continued off and on for many months, almost a year. A friend told James’ father about A Step Ahead Foot + Ankle Care which lead them to visit us.

After a thorough history and examination including watching James walk using our specialised gait analysis software we established that James had flat feet and that it was in fact this that was leading to a large amount of his pain. 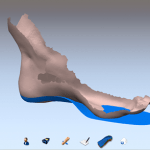 We decided to fit James with some custom made orthoses (insoles) as these are designed to fit his foot exactly and are able to be custom designed – like prescription glasses – to assist him with his pain. We took a laser 3D scan of his foot to ensure a perfect fit and designed these for him on our computer aided design software.

A month after fitting, at James’ complimentary check-up there were beaming smiles all around! Mum reported

James had not had any episodes of waking up in pain. James said his orthotics were comfortable and he enjoyed wearing them so much he was wearing them every day and swapping them between his school and sports shoes. Another free check-up the following month revealed the same. 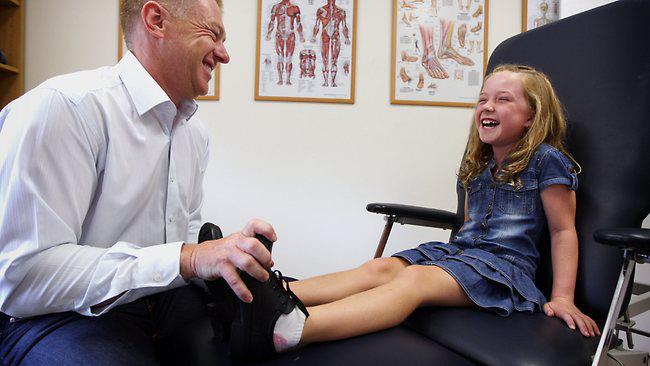 Children and flat feet – do they need orthotics

One of the most common reasons kids present to podiatrists is for the treatment of ‘Flat Feet’.  I personally see hundreds of children a year who have flat feet and require my assistance. It can be a simple problem to under estimate but without the right advice and attention can lead to a life time of problems.

A ‘flat foot’ can be described in many ways, ‘fallen arches’ ‘rolled in ankles’ or ‘excessive pronation’. This type of foot is relatively common in children. Many children with “flat feet” remain symptom free for many years.  However, in many cases if this foot type continues through to adulthood it may become symptomatic and can be a causative or contributing factor for many other foot problems.

For many children the answer will be orthotics which are specially designed insoles that are placed inside the child’s schools shoes and joggers. They are relatively unobtrusive and do not require special shoes to fit – Most times they will fit perfectly inside your Clarks school shoe by simply removing the specially designed removable liner.

When do kids need orthotics?

In my clinic when assessing patients I look for 4 sign / symptoms in children in conjunction with a flat foot before deciding on whether a child needs orthoses.

Pain – If there is any pain present it often means the muscles in the feet and legs are under pressure meaning the bone structure is not able to perform its job and may require assistance from an orthotic to help.

Growing Pains – There are a terrible amount of growing pains diagnosed by well-meaning practitioners. Please consider having your children’s feet checked. It is my opinion that many times growing pains may be able to be stopped by simply looking at how your child walks or runs and treating any imbalances.

A note about “growing pains” There are a terrible amount of growing pains diagnosed. By well-meaning practitioners. Please consider having your children’s feet checked. It is our opinion that many times growing pains may be able to be stopped by simply looking at how your child walks or runs and treating any imbalances. I continue to be impressed and please by the really positive result we are seeing in patients when these imbalances are corrected.

If you child has one or more of these signs it is a good idea to consult a podiatrist. Treatment with orthotics while initially appearing expensive has significant health benefits to children. In times when we are struggling to get our children outside away from computer games. I think ensuring you have a child that is happy and health and able to play happily outside without pain is a must.

By Dr Brenden Brown Podiatrist
Dr Brenden as he is called by kids who visit our clinics is a recognised expert in kids feet. He has a passion for keeping kids happy healthy and active! For this reason Dr Brenden has appeared on dozens of television shows and literally hundreds of media articles. He has proudly spent time as the ambassador for Clarks foot wear – one of Australia’s leading kids foot wear brands. He see’s children with foot and ankle pain in his clinic every day helping get them back to pain free. While Dr Brenden has been recognised world wide for his expertise, he is in fact most proud of being a Dad to two happy healthy fabulous daughters!