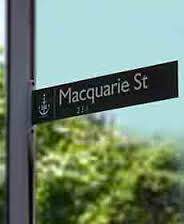 Sydney’s Macquarie Street is difficult to get to, has no parking and is full of toffs! Guess what ? Western Sydney is taking its place for quality health care!

For years we have all heard of people heading into Sydney’s Macquarie Street for a specialist appointment. It was reported to be where all the good specialists practised and somehow by word of mouth and myth became the centre of Sydney’s health specialist community. But is it true?

While Macquarie Street has that reputation it also has NO parking and very poor public transport as well! Specialists aren’t chosen to practice in Macquarie Street they simply pay more rent and guess what that means – YOU PAY HIGHER FEES!

We have noted a change in peoples thinking of late, as we have become more popular and sought after by the Sydney community. Despite the fact that the Podiatrist at A Step Ahead are regulars experts on TV shows like the Today Show and have appeared as experts in Men’s Health Magazine, New Idea, Prevention magazine and Women’s Health to name but a few we practice quite happily in Penrith in Sydney’s western Suburbs!

With wide streets, hassle free motoring and easy parking, on most occasions right out the front of the door of your doctors rooms why battle the city? Public transport to Western Sydney is regular and reliable, so you have to ask yourself why others haven’t cottoned onto this? Well our experience says that they are!

In the past month A Step Ahead has seen patients themselves coming from Sydney’s Eastern suburbs making appointments to see us. We have also had patients travelling from Lithgow and Sutherland and from as far away as Tasmania within just the last week of the date of writing this. We must be doing something right?

So if you haven’t, is it time you made a change?